I have been in London for nearly three months now. My second stint, as an immigrant, in this gorgeous country. I am a foreigner and as such, I have not grown up with certain “English mentalities”, as it comes to cycling. There is one thing, which really baffles me. The difference in the kind of bikes sold and used over here, compared to mainland Europe (Netherlands, Belgium, Denmark, Germany).

What I have noticed is, the English like to stare at the tarmac, while cycling. They like to contort themselves in strange positions on a bike, head down, unaware of their surroundings! And you know why? Because they don’t know any better! Because in this country, it is hard to come by a decent utility bike.

If you quickly look at bike shop websites you can easily spot the problem. Look for example at this: 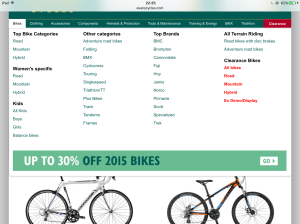 Look at the Bike Categories. ~ Road, mountain and hybrid~ 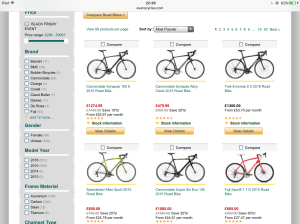 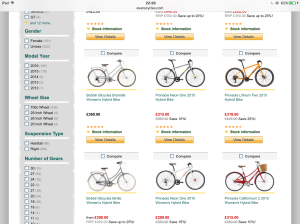 Above is an excellent example of a run of the mill mass bike shop and they all sell tarmac staring bikes. And you know what? I don’t get this. A city like London is a city where danger comes from all sides. Car drivers, hgv drivers and anything in between. But, you also need to be aware of other weak road users, such as pedestrians. How can you keep an eye on all that, when your eyes are fixed to the floor and your back is bent over? I simply cannot put two and two together.

When talking to “anti-cycling” people, I often hear the likes of: “you lycra wearing road terrorists”. But, that is the mentality, here in The UK. I wonder, without realising, are cyclists contributing to this mentality? By the choice of the bike they cycle?

Would an anti cycling person say the same to people in these pictures? (with thanks to aviewfromthecyclepath.com)

I’d like to understand the differences in mentality and inherently the culture. To see whether it is possible at all for the Dutch culture to be adapted here in the UK. Why is there such a big difference between the sort of bikes in both countries?  Do let me know your thoughts.

12 thoughts on “Staring at the tarmac”